Crowdlearning: relationship between self-organization and programming 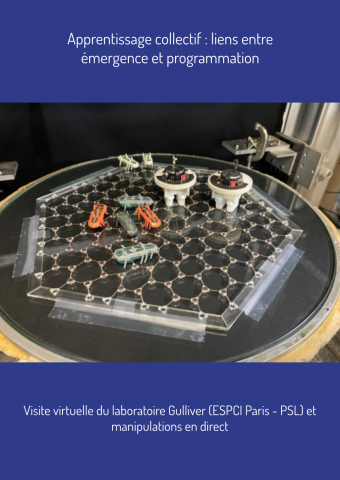 Living systems composed of many individuals display fascinating behaviors in many ways. One thinks of the immense swarms of starlings whose ballets beautify the sky of our countryside, but also of the formidable organization of the various societies of ants or bees capable of a thousand feats to build their nests, to find food, or to migrate from one site to another.

The observation of these systems is an endless source of inspiration for researchers interested in swarm robotics. How to program a large number of relatively simple robots to perform similar tasks?

From the outset, the question of the coding of a the program. Should each robot be programmed to react in such and such a way to each of the situations it may encounter? This is hardly imaginable given the endless variety of possible situations. An alternative is to program each robot to learn, as and when it encounters new situations. Better yet, we can try to program the robots to learn collectively, by exchanging good ideas for example!

But is it necessary to learn everything? After all, nature also contains many examples of emergent phenomena, in which a large number of entities self-organize to form a whole with remarkable properties, without any form of learning being at work. The best-known example, which is nonetheless the most spectacular, is the crystallization of a liquid into a solid: several billion billion molecules order themselves into a geometrically perfect whole in a few seconds! This phenomenon has been "well" understood by physicists for a "long time". What place should be left to emergence in the realization of collective tasks?

Perhaps the intelligence of our dear bees consists precisely in learning only what is necessary in order to make the most of what emerges spontaneously? In which case, we would do well to learn from them...

The experimental conferences are supported by the ESPCI Paris Fund.

Online conference. The lecture will be live broadcast on the ESPCI's YouTube channel.