External causes and conditions of disease and health 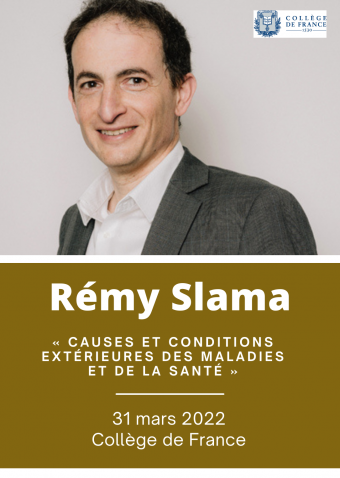 Rémy Slama, an environmental epidemiologist, will give his inaugural lecture entitled "External Causes and Conditions of Disease and Health".

The inaugural speech will provide a chronological overview of the risks that have weighed or still weigh on human health, from the epidemic-war-famine trilogy, which has gradually and partially faded away to make way for so-called lifestyle factors (tobacco, alcohol, dietary imbalances, sedentary lifestyle) and physico-chemical agents. Our movement, centrifugal with respect to the patient and the onset of the disease, will consist in moving from the enumeration of the causes of death to the identification of the causes of the causes. Infectious pathologies, whose development may have been favored by (among other factors) the invention of agriculture, which brought humans and domestic animals closer together, favoring zoonoses, were until the beginning of the 20th century the major cause of mortality in Europe. With their progressive control in the northern countries, an epidemiological transition took place, with a decrease in mortality, which allowed a spectacular increase in life expectancy, multiplied by three in three centuries (from about 25 years before the Revolution to 82 years today in France), explained by the decrease in mortality by infectious diseases, often occurring early, progressively replaced by chronic diseases, generally occurring at a later age. We will recall the contribution of genetic polymorphisms and lifestyle factors to the occurrence of chronic diseases. Then we will discuss the changes in our environment during the Anthropocene, the general elements in favor of an effect of the physico-chemical environment on the occurrence of these chronic diseases, and the more specific arguments in the same direction, based on recent methodological developments, both in the field of toxicology and, in humans, of exposure biomarkers and causal inference (Judea Pearl), which provides a rigorous framework for the identification of the causes of diseases in a non-experimental approach.

The speech will be live broadcast on the Collège de France's website.

Speeches, lessons and seminars are free of charge, available to everyone, and no prior registration is required.