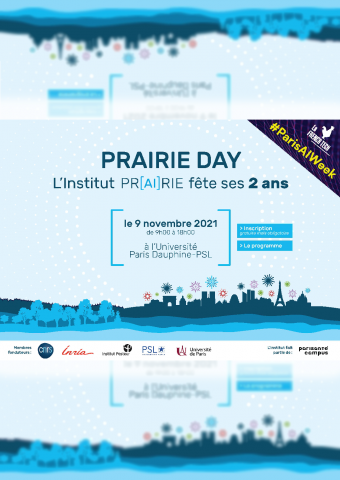 The event will be a feedback on the challenges of Artificial Intelligence research as the PR[AI]RIE Institute reaches its second year in operation.

This program is part of the Paris AI Week.

PRAIRIE was selected in April 2019 following the call to create Interdisciplinary Institutes of Artificial Intelligence (3IA) as part of the national AI strategy launched at the AI for Humanity summit by French President Emmanuel Macron. This institute, led by CNRS, Inria, Institut Pasteur, the University of Paris and Université PSL, with the support of industrial partners such as Amazon, Deepmind, Engie, Facebook, Faurecia, GE Healthcare, Google, IDEMIA, Microsoft, NAVER LABS, Nokia Bell Labs, Pfizer, PSA Group, SUEZ, Uber, and Valeo, aims to be a place of excellence in research on artificial intelligence in Paris.

Registration is free of charge but it is required.