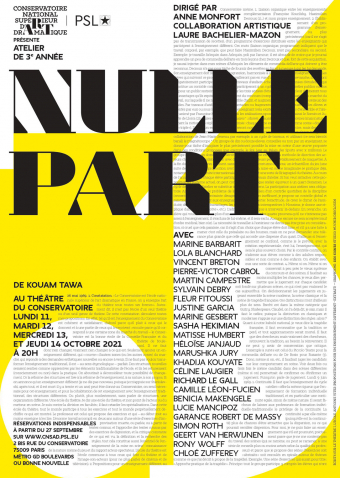 The 3rd year students of CNSAD - PSL present the workshop Nulle part directed by Anne Monfort and Laure Bachelier-Mazon on a text by the author Kouam Tawa.

Nowhere tells the story of a group of young people lost in a place crossed by ghosts, where the dead were buried, where the spirits take revenge, where history and literature demand to be rehabilitated, including in their holes. Through the parable of these "brothers and sisters" literally lost in the middle of Nowhere, a reflection on a new solidarity and on the political future of Cameroon emerges.
Through the musicality of the text, its immersive dimension, we went through our nightmares, trying to give them a scenic form. In retinal persistence, paintings telling different ways of being together and separated, the voices of the excluded and the witches reappear. Somewhere between the fantasy series, the horror film and the poetic performance, the voices and the bodies of Nowhere try to be together to get out of it.