2021 International Rankings: PSL ranked among top young universities for the third year in a row

Université PSL is ranked #1 among millenial universities, and #3 and #5 among young international universities by the Times Higher Education and the Quacquarelli Symonds agency. PSL is #1 European university according to international rankings released on June 24, 2020.

The 2021 Young University Ranking (YUR) was released on June 24 by the Times Higher Education (THE) and QS Quacquarelli Symonds. PSL, which entered these rankings in 2018, is ranked #5 by QS and #3 by THE, thus moving up one place compared to last year. PSL is the leading French university for the second year in a row and is now ranked #1 among European universities.
This positioning is significant, because the world's top 5 are watched with great attention by international students. PSL thus ranks alongside excellent international (NTU of Singapore, Hong Kong University of Science and Technology) and national (Sorbonne University, the University of Paris being respectively #9 and #10 in the THE ranking) higher education institutions.
The good results are confirmed by a third ranking published the same day by the Times Higher Education: the Millenial University Ranking. Complementary to the YUR ranking, it follows each year the progress of the world's youngest universities created after year 2000. In 2018, PSL entered as #1. It keeps its rank this year and is joined on the podium by two major French universities: Sorbonne Université (#2) and the Université of Paris (#3). 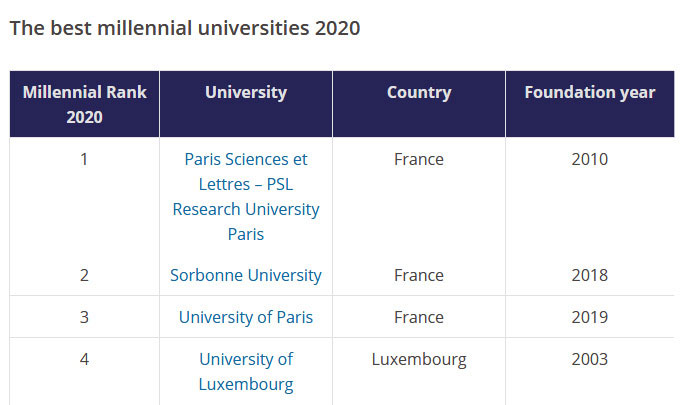 "These results consolidate our community's collective effort to build the model of a public university with high global visibility and appeal. These rankings help to shed light on the excellence of the research carried out in French universities. It should be noted that our competitors are beyond our borders and that our financial resources are not comparable to those of major international institutions. I am delighted that PSL is now ranked first among European universities under the age of 50, and that other major French higher education institutions are close to it."

PSL in the international rankings