2021 Shanghai ranking: PSL among the top #50 universities for the second year in a row

Université PSL, ranked #38, is included for the second year in a row among the competitive top 50 universities, next to renowned European and international institutions such as Kyoto University.

PSL is delighted with the good result from its communities and congratulates its peer institutions, members of Udice, which are among the top 20 (Université Paris Saclay #13), top 50 (Sorbonne Université #35) and top 100 (Université de Paris #75). All of them, included in the 2020 rankings, demonstrate once again they deserve their ranking among the best research-intensive world universities and they contribute to improve the exposure of the French research and education. 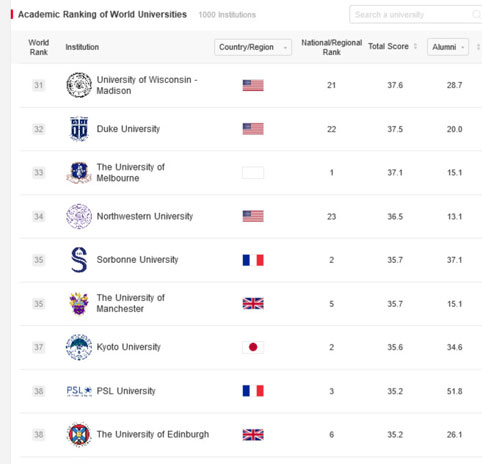 Located in the heart of Paris, PSL inspires dialog among and between all areas of knowledge, innovation, and creativity in Sciences, Humanities and Social Sciences, Engineering and the Arts. Selective and committed to equal opportunity, it draws directly from current research to train researchers, entrepreneurs, artists and managers who are aware of their social responsibility, both individual and collective. With 2,900 researchers, 17,000 students, 140 laboratories and 10 incubators, fab labs and co-working spaces, PSL is a human-scale university. It ranks among the world’s top 50 universities according to the THE (Times Higher Education) and QS (Quacquarelli Symonds) rankings.