CPES, a PSL undergraduate course, attracts largest class yet in its 7th year

The 156 students in the 2018 incoming class for CPES (Multidisciplinary undergraduate Degree, a course sponsored by the PSL schools and institutes and Lycée Henri-IV) began their academic year in Paris on September 10. 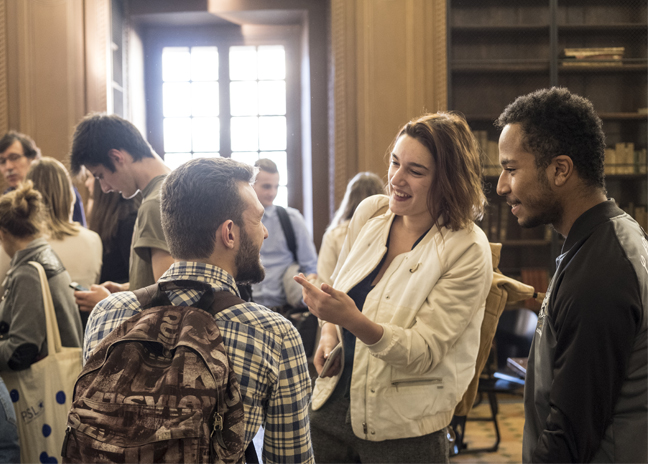 As in 2017, CPES is operating with twice the student body. The program is more appealing than ever: this year, it received more than 3,500 applications on Parcoursup, a 73% increase over 2017. Over the next few years, CPES will continue to grow in order to support the aspirations of even more high school students students.

This year, 156 students began the year in this undergraduate program, the only one of its kind in France. More than 3,500 (up 73% from 2017) had applied last spring via Parcoursup, a French platform for managing undergraduate applications platform. By July 21, the course was already more than 93% full.
These high-potential students – 93% of whom earned their baccalaureate with highest honors – come from a variety of social, cultural, and geographical backgrounds.

CPES has been strongly committed to maintaining this diversity from the start. In 2017, the program added two field initiatives: Les Cordées de la Réussite, a program to promote academic success through partnerships between institutions of higher education and 26 middle and secondary schools in high-priority areas of Amiens, Versailles, Créteil and Paris, and a partnership with AEFE (the Agency for French Education Abroad).

Over the years, diversity has proven to add real value in helping our students succeed. It encourages them to develop a sense of solidarity and open-mindedness, and fosters a strong group emulation, which gives each CPES class its unique character.

Ultimately, the 2018 incoming class includes students from all across France (see chart) and abroad (10% international students), as well as 50% scholarship recipients and 16% students from the Cordées de la Réussite program. In the Science section, 58% of students are female, despite a national average of 31.1% women in preparatory classes for scientific programs.

CPES, a new model for undergraduate education, has rivaled the leading international Bachelor’s programs since its creation in 2012. As proof, an analysis of the course’s four graduated classes shows that 100% of students have continued their studies in selective Master’s programs at top schools and universities in France and abroad.

Regarding the class of 2017, Isabelle Catto, Vice-President of Bachelor's Degrees and Academic Affairs for PSL, adds: “In 2017, of the 73 graduates, 6 were admitted to Ecoles Normales Supérieures (ENS), 32 joined Master’s programs at PSL (Paris-Dauphine, EHESS, etc.) or other graduate schools (MINES ParisTech, ESPCI), 8 were admitted to Sciences Po (IEP), 4 joined Ecole Polytechnique (including 2 women!), and 7 went into Master’s programs abroad… we are very proud of their academic paths. They offer fresh proof that CPES is meeting its goals of excellence, diversity, and success in rigorous Master’s-level studies.”

On October 3, the entire 2018-2021 class will attend the opening lecture by professor Gilles Kepel, director of the Middle East and Mediterranean Chair at PSL, as part of the CPES annual lecture series.