Université PSL established a Knowledge Dissemination Taskforce in September 2020. That taskforce has invited the entire PSL community to help create and take part in a Knowledge Dissemination Network. Olivier Dauchot, a researcher at ESPCI - PSL, director of the Gulliver Laboratory and a leader of the project, gives us an overview and talks about the project’s objectives.

PSL: How did the Knowledge Dissemination Taskforce get its start? 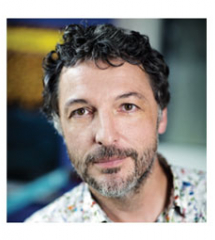 Olivier Dauchot: Once PSL acquired the status of a full-fledged university, it became clear that we had to address the issue of its relationship with society and define a knowledge sharing strategy. Once we obtained financial support, following our response to the Ideas call for proposals that was part of PSL One, we were able to fulfill that need. Consistent with the principle of subsidiarity, PSL President Alain Fuchs asked Vincent Croquette, General Director of ESPCI ParisTech - PSL, to give an ESPCI researcher the task of developing a strategy. So in early October 2020, I put together a taskforce made up of researchers as well as representatives from the worlds of mediation and scientific communications from every PSL school, plus members of the community. The group’s primary mission was to identify our existing programs and propose the outlines of a strategy for PSL and a roadmap for the next 10 years. Those were presented to the heads of PSL schools and won their approval, so now the Knowledge Dissemination Taskforce can move full speed ahead with its action plan.

PSL: How would you sum up PSL’s strategy for knowledge sharing?

Olivier Dauchot: PSL is located in the heart of Paris and so obviously it has access to a large audience, but it’s a demanding audience that can easily acquire knowledge from other, very impressive sources that are in just as good a position to provide it, such as the National Museum of Natural History, Universcience, Paris’s other universities and so on.

Within that environment, we have some distinctive assets:

So the university is in an especially strong position to:

PSL: With more than 2,900 instructors and research professors, 140 laboratories and a large number of doctoral students across every discipline, Université PSL is an exceptional pool of scientific knowledge. How will the Knowledge Dissemination Taskforce help the university mobilize that scientific might? What’s your roadmap?

I had no idea that there are more than 100 scientific mediation events happening at PSL every year and they reach an audience of 150,000 visitors, and 250,000 people online, and that doesn’t include students!

Olivier Dauchot: Our roadmap is both ambitious and realistic. The goal is to draw as much as possible on what we already have in place, which is an enormous amount. I had no idea that there are more than 100 scientific mediation events happening at PSL every year and they reach an audience of 150,000 visitors, and 250,000 people online, and that doesn’t include students!
Our activities are organized around three main objectives: 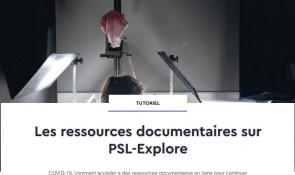 PSL: What are some upcoming highlights on the knowledge sharing agenda at PSL? 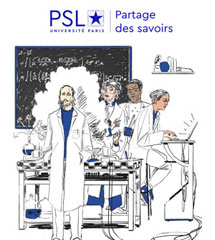 Olivier Dauchot: : First and foremost is the kick-off of the Knowledge Dissemination Network, which will be held online on May 25 from 2:00 to 5:00 p.m. The event will have three parts: after a very quick informational briefing, we’ll be inviting participants to learn more about some of the knowledge sharing initiatives in place at PSL, and then we’ll encourage them to imagine the Fête de la Science - science fair - of their dreams.
That’s because this year marks the 30th anniversary of the Fête de la Science, and we intend to capitalize on that by offering our audience some wonderful experiences that will introduce them to the wide range of research being conducted at PSL and show how that research is helping to enlighten us about the challenges facing the world of the future.
In addition to those events, we’re already thinking about our first calls for interest on creating participatory science programs — because knowledge sharing can’t be boiled down to just a few events; it’s a day-to-day process.

Join the kick-off event of the Knowledge Dissemination Network

PSL: With the emergence of “fake news” and the major societal challenges we face, the connections between the world of research and the broader society are a core concern. How, in your view, can scientists best share their knowledge with the widest possible audience? And how will the Knowledge Dissemination Taskforce promote that spirit at PSL?

A program to train people in those mediation practices will be created through our staff training program, or students.

Olivier Dauchot: The statement by France’s Minister of Higher Education and Research reflects a clear awareness that the ties between science and society have real implications for democracy. To meet that challenge, we need to go beyond the practice of only sharing knowledge in one direction in the way your question suggests. We need to reestablish a dialogue. The public now has access to a lot of information, and some organizations have really developed expertise that might surprise many researchers by its scope, so the public’s questions but also its knowledge are something they themselves can, and in most cases want to, share with researchers.
We can’t establish that dialogue without creating many different forms of mediation. We have to make allowances for terminology or certain points of view. All of that takes time and requires real know-how. So we have to take a professional approach to disseminating knowledge, by drawing on recognized expertise and partnering with organizations such as Universcience or Traces, which for several years has been operating the Espace Pierre Gilles de Gennes, among other resources. And let’s not forget our own researchers who have studied mediation and knowledge sharing.
One of the Taskforce’s activities will be to create a program to train people in those mediation practices, whether they’re researchers, through our staff training program, or students, as an integral part of their curriculum.

PSL: You’ve taken part in multiple events that were aimed at teaching the public about science. What do you remember the most? 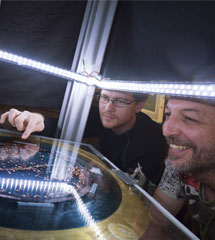 Olivier Dauchot: I think back very fondly to something in 2004. That year’s International Garden Festival at the Domaine de Chaumont-sur-Loire gave me an opportunity to illustrate the idea of chaos by creating a turbulent fountain. My conversations with the public were really rewarding. But my talks with the Domaine’s fountain engineer were even better, mutually sharing our knowledge to create something jointly.
Another memory I have, which is much more recent, was my experience with “Dissect,” a program that was developed as part of the Reflective Interaction research group at EnsadLab, the laboratory at the École des Arts Décoratifs de Paris. It was presented at the Centre Georges Pompidou alongside the “Designing the Living” exhibition. Dissect was freely inspired by anatomy lessons. The idea was to ask a group of researchers to analyze and debate contemporary works of art and design that were being manipulated on a table, in a unique interactive stage setting. It’s no longer enough to talk about things; we need to dissect them in a shared public space. In that case, it was the chance to connect with the other researchers involved in the presentation and spend time with other scientists from fields that are completely different from mine that really offered a special opportunity, with the audience mirroring our own questions.

PSL: In conclusion, what would be your message to the scientific community at PSL?

Olivier Dauchot: Be there on May 25 for the kick-off of the Knowledge Dissemination Network! All too often we don’t focus on the contribution that researchers make in mediating their work. By joining together, we’ll be able to give a new, PSL-wide dimension to our knowledge sharing activities. That’s vital for keeping us motivated, and it’s key to ensuring a successful, constructive and relaxed dialogue between science and society.

Further information about the event