PSL: Only European University among the Top 5 Young Universities Globally

PSL now ranks #2 in the Times Higher Education global ranking of young universities, thus consolidating its position among the world’s most prestigious institutions. This makes it the only European university founded within the past 50 years to rank in the top 5, alongside 4 Asian universities. 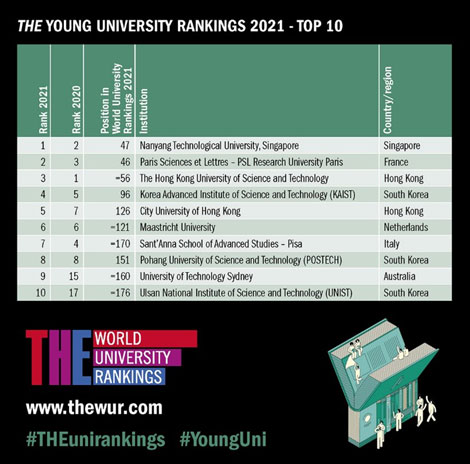 On June 23, Times Higher Education released its annual ranking of global universities aged 50 years or younger (Young University Rankings). This year’s list includes 475 universities and is based on 13 performance indicators similar to those used for the World University Rankings (WUR). The criteria judge universities across all their core missions—teaching, research, knowledge transfer and international outlook—and recognize the emergence of recent universities built around new models.

Appearing in the rankings for the fourth consecutive year, PSL has climbed one place to rank second. It is the only European university to appear within the global top 5, alongside leading Asian universities such as Nanyang Technological University (NTU) in Singapore and the Hong Kong University of Science and Technology, which rank #1 and #3 respectively.