The École Nationale des Chartes – PSL is celebrating its bicentennial this year. The School’s director, Michelle Bubenicek, looks back on 200 years of history and describes the celebrations planned for this year. 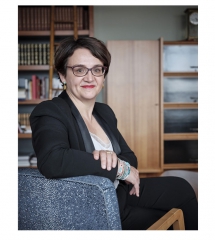 The École Nationale des Chartes – PSL, which was established by decree on February 22, 1821, is celebrating its 200th birthday in 2021. On February 22, 2021 – 200 years to the day after the institution was founded – France’s national philatelic program issued a stamp to mark the official start of festivities to celebrate the event. The engraved stamp’s iconography is intended to call to mind both the School’s identity and its evolution over the centuries, highlighting how the ENC’s areas of research and teaching now range from parchment to digital technology. The stamp also shows a medieval charter from France’s Burgundy region, designed to serve as a quintessential example of French “charters,” and on a screen, TEI encoding of the corresponding Latin text. It also depicts the engraved pediment on the door to the Sorbonne building, where the ENC was housed for the longest period in its history, from 1897 to 2017. In 2015 the School moved from Paris’s left bank to 65 Rue de Richelieu on the right bank, opposite the former site of the Bibliothèque Nationale de France.

Numerous festivities will be held throughout the year to commemorate the bicentennial of the École Nationale des Chartes and provide a better understanding of the role our School plays. The ENC is a unique institution, part of the shared wealth of all those who are driven by an enthusiastic love of history and heritage. Those festivities will include a lecture series specifically devoted to the ENC’s history and some of its major figures, and a roundtable discussion at the Sorbonne Grand Amphithéâtre. In addition, we’ll be hosting two colloquies: the first is in partnership with the Académie des Inscriptions et Belles-Lettres, a tutelary institution that played an active role in the founding of the ENC. The second, organized in partnership with the French Ministry of Culture, will address the School’s role in teaching about, administering and showcasing France’s national heritage. 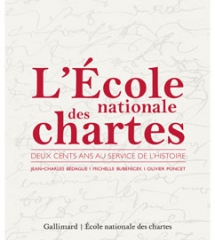 The ENC is also celebrating its bicentennial by joining with Gallimard to publish an accessible, richly illustrated volume that traces its eventful history and special holdings, many of which are unfamiliar to the general public. They include source materials of all kinds and in every format from the past 200 years, including written and non-written resources and now digital materials, that are at the heart of the School’s teaching and research, including the old formal documents (“charters”) cited in its name that reflect the School’s original purpose. As a result, the Ecole Nationale des Chartes is both a specialized institution and a highly multidisciplinary one. The very variety of these resources justifies the chairs of excellence that the School hosts today and the diversity of its teaching. Thus, the ENC trains conservation specialists, researchers and research professors who are experienced in document criticism and who share an extensive knowledge of heritage collections and objects, ranging from archives and manuscripts to books, printed matter and, now, digital data. That vocation helps to explain the School’s special position at the crossroads of academia and the professional heritage community.

The ENC’s 200 years of existence have also been marked by a spirit of innovation that has prompted an ongoing expansion of its curriculum to include the study of new materials (photographs, audiovisual and computer records) and new practices (such as video games). In addition to this openness to current disciplines within its curriculum, the School’s creation of specialized Master’s degrees and the rising number of PhDs it produces have helped to consolidate its role within the university while spotlighting its contribution to recent historiographical developments, which are notable for their interdisciplinarity and their use of the digital and computational humanities and world history. The School’s integration into PSL has helped to strengthen and substantiate all of those developments. That close acquaintance with both ancient and more contemporary source materials undoubtedly remains the School’s trademark within PSL and continues to define the “Chartist spirit.”