The 108 students in the CPES program’s fifth graduating class will be receiving their diplomas at a ceremony scheduled for February 7. Here’s a look at some of the top-ranked destinations for the graduates from this unique curriculum. 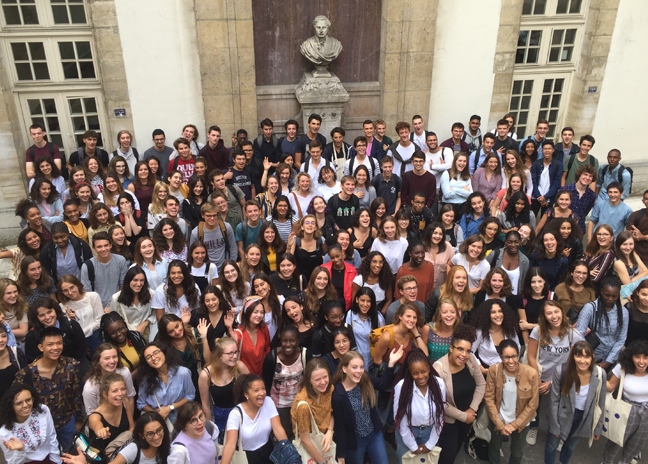 As they face a bright future, the 108 graduates from the CPES program gathered for one last evening in their honor before they depart to pursue further study. Several will soon be students at one of France’s écoles normales supérieures or at top-ranked international schools such as the EPFL and the London School of Economics, while others will continue their academic pursuits at MINES ParisTech, Dauphine-PSL, Sciences Po, Polytechnique or in one of PSL’s Master’s degree programs.

Of the 108 students in this fifth graduating class, 21 have been admitted to an école normale supérieure, 36 will pursue Master’s degrees at PSL or other top graduate schools, nine have been admitted to Sciences Po, two are heading to Polytechnique, five are beginning Master’s degrees at institutions outside France and three are going on to prominent art schools. Isabelle Catto

During the three years that have passed since they entered the CPES program in 2016, this graduating class has seen some intense times, forged strong friendships and – above all – gained a multidisciplinary education that is unique in France. Established in 2012, the CPES is an undergraduate degree program administered by Université PSL and Lycée Henri IV that combines the best of both university education and preparatory classes for France’s top graduate schools in a single curriculum. CPES students gradually specialize in one of three fields of study (Humanities; Science; Economic, Social and Legal Sciences [SESJ]) in order to decide on a Master’s degree to pursue and construct their career plan. After an initial year of classes at Lycée Henri IV, students choose two majors, but a portion of the curriculum is still allocated to electives that they can use to round out their education, based on their aspirations and curiosity.
“My best memory is undoubtedly when I discovered philosophy in my second year,” says Avril, a student in this year’s graduating class who’s now pursuing a Master’s in philosophy at ENS-PSL. “While I was studying Socrates, I suddenly realized that I could do philosophy too.”

That gradual specialization is one of the assets of the CPES program and partly explains why its graduates go on to such a wide range of academic pursuits. “What a pleasure it’s been! We’re very proud,” says Isabelle Catto, CPES Director and Vice President for Undergraduate Education and Academic Affairs at Université PSL. “Of the 108 students in this fifth graduating class, 21 have been admitted to an école normale supérieure, 36 will pursue Master’s degrees at PSL or other top graduate schools (such as MINES ParisTech and ESPCI), nine have been admitted to Sciences Po, two are heading to Polytechnique, five are beginning Master’s degrees at institutions outside France and three are going on to major art schools. In general over the years, 100% of our graduates have continued their education in the most highly selective Master’s programs here in France and worldwide.”

I’ll always maintain a CPES habit I developed of trying to get to the heart of things, asking myself why things are the way they are and whether something else might be possible. Mealdey Duong, 2017 CPES graduate

The instruction in the CPES program is designed to put students on a path to success both in France and at the international level. In addition to the solid grounding they receive in science, students are encouraged to go beyond their acquired knowledge. Programs and workshops such as “Arts and Culture” and “Introduction to News Writing,” or the introductory course on conducting research, help students build cross-disciplinary skills and acquire the ability to think independently and maintain a critical mindset – essential attributes that are highly sought after.
“Criticism is easy but art is difficult” – for Malik Mouakher, a 2018 CPES graduate in the SEJS track, that’s an adage that sums up the rigorous approach he learned in the CPES program. Now in his second year of a Master’s program in the economic and social sciences at PSL with an eye toward pursuing a doctorate, Malik says that “our professors were constantly telling us, ‘Don’t ever fall into the trap of being too certain of yourself.’ The instruction we received in economics and social sciences in the CPES program reflected that intellectual rigor: it was completely free of any bias toward special interests or an individual ideology.”
Says Mealdey Duong, a 2017 graduate in the SEJS track who’s currently a student in the Law and Public Administration Master’s program at Dauphine-PSL offered jointly with the ENA, “After the CPES, I decided to get a Master’s degree to gain expertise in the field of policy and public administration. The fact is, I enjoy my courses in public finances just as much as I did the courses on the history of empires. The approach is different and so is the end goal, but I’ll always maintain a CPES habit I developed of trying to get to the heart of things, asking myself why things are the way they are and whether something else might be possible.”

Just as current high school students are finalizing their choices on the Parcoursup national application portal, more than 50 CPES alumni volunteered their time on Saturday, February 2, to talk with the many parents and students attending the Open Days event about the CPES program, offering advice and reassurance. The CPES program is becoming more and more successful every year, and our alumni are the best evidence of that.

CPES, a PSL undergraduate course, attracts largest class yet in its 7th year