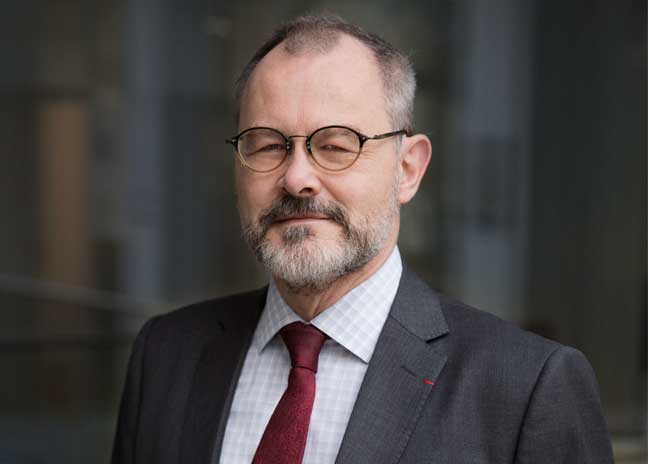 PSL: The university is launching its 2019 Master’s campaign. What’s new this year?

Starting in fall 2019, all students in our Master’s programs will receive PSL degrees, which represents a valuable passport internationally.

Hubert Bost: Plenty, because we are rolling out a brand new offering this year: 39 selective, multidisciplinary Master's degrees will be opening this year on the various PSL campuses (ENS, Paris-Dauphine, MINES ParisTech, Chimie ParisTech, EPHE, Ecole Nationale des Chartes, ESPCI Paris, Observatoire de Paris, etc.). Nearly half of these programs are inter-institutional and approximately 20 of them offer “English tracks”, with French as a foreign language available to non-French-speaking students.
Our 39 Master’s programs cover a broad range of disciplines, from life sciences to cognitive sciences, mathematics, philosophy, and quantitative economics... and they promote education through research while offering varied prospects for careers in science, management, entrepreneurship, and more.
To illustrate what makes this offering from PSL so unique, let me cite the example of the Master's in Mathematics and Applications hosted notably by Paris-Dauphine and the ENS. This PSL Master’s, which mainly targets students interested in careers in finance and actuarial science, has a relatively commonplace name but offers in-depth training in everything from “pure” mathematics to applied mathematics, including applications in the humanities. This approach is designed to transcend the typical divisions between disciplines and allow students to follow their own disciplinary interests rather than being limited by a defined career path.
In addition, these inter-institutional programs give students access to the best professors and allow them to experience a variety of educational cultures. To give another example, the Master’s in Material Science and Engineering hosted by MINES ParisTech, Chimie ParisTech, and ESPCI is based on the synergies between PSL’s three major engineering schools in a university context. It offers the best of both systems and, ultimately, turns out professionals who are experienced in research techniques and have a broad view of the field. This is rare enough to be worth emphasizing. At the same time, the rich offerings of each institution contributing to the Master’s allows for a wide variety of tracks. Coursework in the Humanities Master’s, hosted by the ENS and the ENC, focuses on aggregation (geography, literature, history) and offers unique tracks such as “transnational history.”
Our new Master’s degrees also are or will be closely tied to our graduate programs and EUR (École Universitaire de Recherche), as the Master’s in Cognitive Science (CogMaster) already is. Starting in M1, students will find inspiration for their own doctoral projects by working closely with researchers, PhD students, and post-docs. Unfortunately I can’t list them all, but our offering also includes highly specialized programs that are widely recognized in their fields, such as the History of Art and Archeology Master’s at EPHE, the Institut Pratique du Journalisme at Paris-Dauphine, and the “Digital Technologies Applied to History” program offered by the Archives Master’s degree at the Ecole des Chartes, to name just a few.
Finally, starting in fall 2019, all students in our Master’s programs will receive PSL degrees (this is already true for PhD students). This diploma represents a valuable passport internationally, enhanced by PSL’s latest rankings.

PSL: What will be the main priorities of PSL’s research and graduate education strategy for the coming years?

A student in Shanghai, Singapore, London, or Boston should be able to think, ‘I want to do my education and research at PSL.’

HB: We want to reorganize PSL’s education and research offerings around graduate programs, which are simultaneously a unique format in the French setting and a model that is easily understood by international students.
What we call graduate programs, and what the French government calls EUR (Ecole Universitaire de Recherche), are educational programs where a Master's degree flows into a PhD. Beginning at the Master’s level, students received into such a program, which comprises Joint Research Units, laboratories, and doctoral schools, will receive an education closely based on research practices and methodologies. For example, they will have the option of taking a PhD track, even before they enroll in a PhD program. This is very consistent with the original plan for PSL.
This new strategy, which is designed specifically with students in mind, will help make PSL’s global program offerings even more attractive. It’s important to remember that within French universities, an LMD (Bachelor’s, Master’s, PhD) curriculum is based on the principle of a division between the three levels. This traditional organization, however, does not correspond to the way research has been organized within many of PSL’s institutions, sometimes for more than a century. At the EPHE, for example, the Master’s and PhD programs are inextricably linked.
A student in Shanghai, Singapore, London, or Boston should be able to think, “I want to do my education and research at PSL.”

PSL: How were the future graduate programs designed?

HB: The plans for the future graduate programs were born out of the call for proposals for “Universitaire de Recherche EUR” launched in March 2017 as part of France’s third “Investments for the Future” program. Two PSL projects were selected—Translitterae and FrontCog—and the exercise served as useful “training” for many others. The next “EUR” call for proposals, which will be launched soon, will invite all candidates to consolidate a common offering across institutions. That suits us perfectly.
Overall cohesiveness is an important aspect of the project and was a central consideration in discussions about the future graduate programs. For me, and for everyone involved in the project, it is obvious that this new mechanism must be scientifically unquestionable and politically irreproachable. In other words, the programs must be fully in line with the strategy of the institutions, and we are working toward that goal. In December, we heard from project sponsors. A summary of these presentations will be provided soon to the heads of institutions. At that point, we will be able to present all PSL stakeholders with an outline of the graduate programs, including scientific and administrative details.

PSL: You were previously President of EPHE, and since November 1, you have been Vice-President of Research and Graduate Education for PSL. How did that transition happen?

HB: Serving as president of EPHE for five years was an honor and a wonderful experience. As a historian, I have devoted a great deal of my scientific activity to the 17th and 18th centuries, in particular to studying the life and thinking of philosopher Pierre Bayle and man of letters La Beaumelle. As president of the EPHE, where for more than 150 years researchers have studied Life and Earth Sciences, Historical and Philological Sciences, and Religious Sciences, my scope of responsibility covered scientific areas of study in which I had no special expertise. That can be an asset: being a president, much like being a vice-president, calls for a certain bird’s-eye view without requiring expertise in every area. You must focus more on general architecture than on details, as important as they are. You need to supply a mode of action, organization, and cross-cutting structure. As a result, I feel that there is a certain continuity between my role as president of the EPHE from 2013 to November 2018, and my current position as Vice-President of Research and Graduate Education at PSL.