Red Team Defense: The Season 1 scenarios have been announced

Université PSL has prepared two synopses – “Chronicle of a Cultural Death Foretold” and “The Sublime Porte Opens Once Again,” which comprise the first of four Red Team Defense seasons. The goal of the Red Team Defense project, conducted under the aegis of France’s Defense Innovation Agency in cooperation with the country’s armed forces leadership (EMA), defense procurement agency (DGA) and directorate general for international relations and strategy (DGRIS), is to anticipate technological, economic, social and environmental risks that could potentially generate conflict over the period 2030-2060. 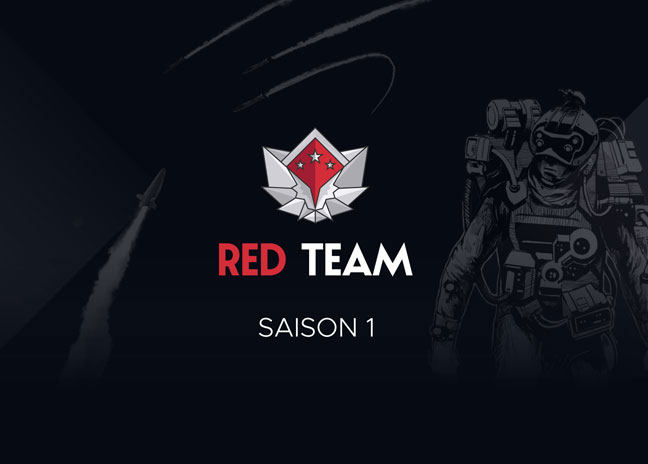 Inventing the future is an essential task for the University. PSL is notable for its ability to blend the hard sciences, engineering, the arts, the humanities and social sciences. That cross-disciplinarity makes PSL an ideal place to combine science and imagination and put them to work on behalf of the public. Alain Fuchs, President of Université PSL

Launched in the summer of 2019, the Red Team initiative is an innovative, forward-looking exercise designed to foster reflection on strategic, operational, technological and organizational issues by France’s Ministry of Armed Forces and outside groups. The Red Team project has been divided into four seasons and draws on the contributions of science fiction authors and screenwriters as well as scientists and military experts.
Following a competitive dialogue procedure, the Ministry of Armed Forces turned to Université PSL to appoint and coordinate the teams and package their work. That network of participants is being led by Cédric Denis-Remis, PSL Vice President for Development, Innovation and Entrepreneurship. Says Université PSL President Alain Fuchs, “Inventing the future is an essential task for the University. PSL is notable for its ability to blend the hard sciences, engineering, the arts, the humanities and social sciences. That cross-disciplinarity makes PSL an ideal place to combine science and imagination and put them to work on behalf of the public.”
A group of creatives – French crime author DOA, sociologist and CNRS research director Virginie Tournay, space opera authors Laurent Genefort and Romain Lucazeau, comics scriptwriter Xavier Dorison, novelist Xavier Mauméjean, comic book artist François Schuiten and designer Jeanne Bregeon – conceived the two scripts featured in the first season of Red Team Defense: “Chronicle of a Cultural Death Foretold,” which envisions a society of virtual communities during a bioterrorist attack, and “The Sublime Porte Opens Again,” which anticipates a technological breakthrough that profoundly changes the rules of combat. 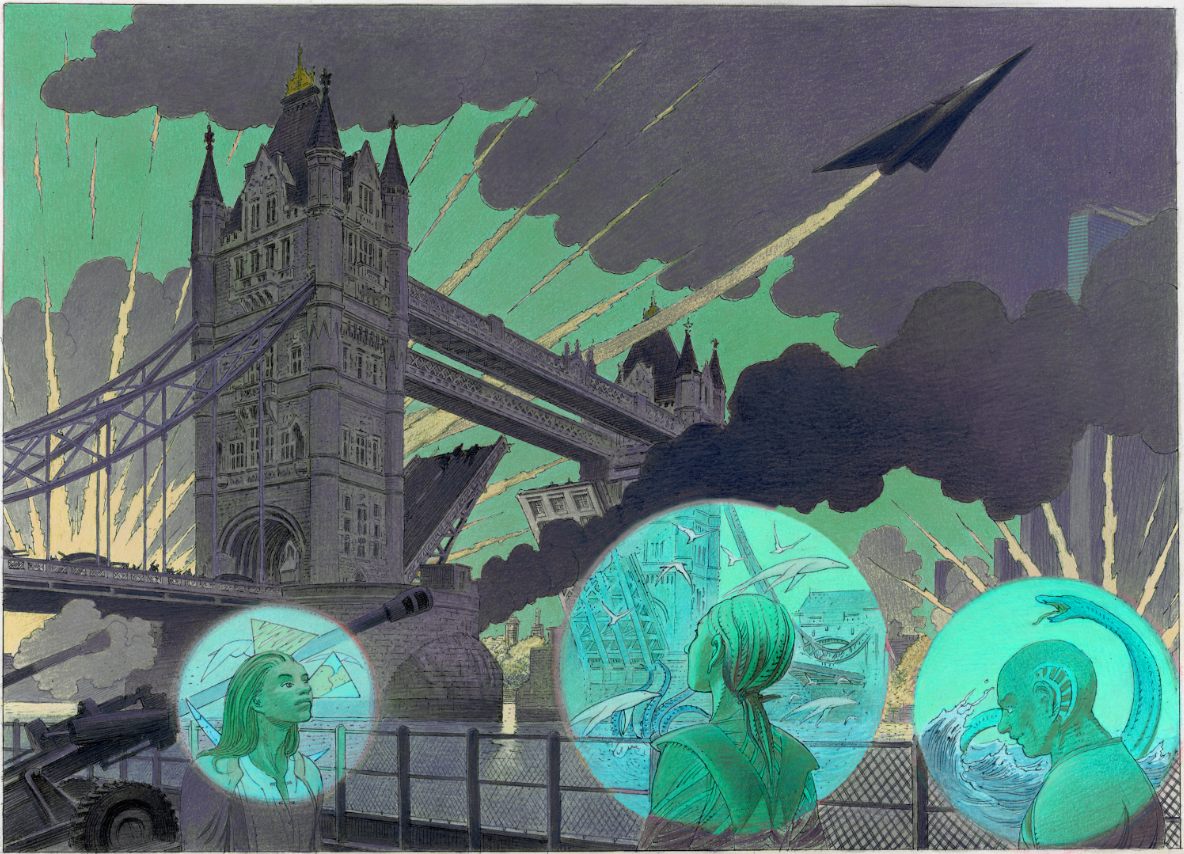 “Chronicle of a Cultural Death Foretold,” by François Schuiten

The development of “safe spheres” has fundamentally changed how people interact with reality. Individuals can choose to join alternative realities that reflect their affinities and interests (religious beliefs, identity, etc.) and are defined by the subjectivity of the community they belong to. By 2040, 90% of Europeans are members of an alternative reality and no longer share a common real world. In Big City, the government is crumbling in the face of these safe spheres, and the population is becoming balkanized. In 2045 the threat of a bioterrorist attack is the final, destabilizing blow to the city, which has already been ravaged by once-in-a-century flooding. A true cognitive war breaks out between competing safe spheres, in which garbled information and character assassination are routine.
In the midst of this highly unstable and uncertain environment, the French military intervenes to evacuate certain populations by order of the European Union, in what’s known as the Omanyd campaign. This outside operation is confronted with numerous challenges: a lack of reliable information in the field, defiance among those to be evacuated, protests by national populations when potentially infected civilians are due to be repatriated, and so on. The French military must ensure the success of the operation and at the same time convince the public that it’s acting on legitimate grounds.

After a relatively quick initial phase of the operation, but still facing a biological emergency in Big City, the French military is asked to assist the previous authorities in securing the real world, i.e., reducing the safe spheres’ influence on local communities. It will take several years to disable the most virulent safe spheres. 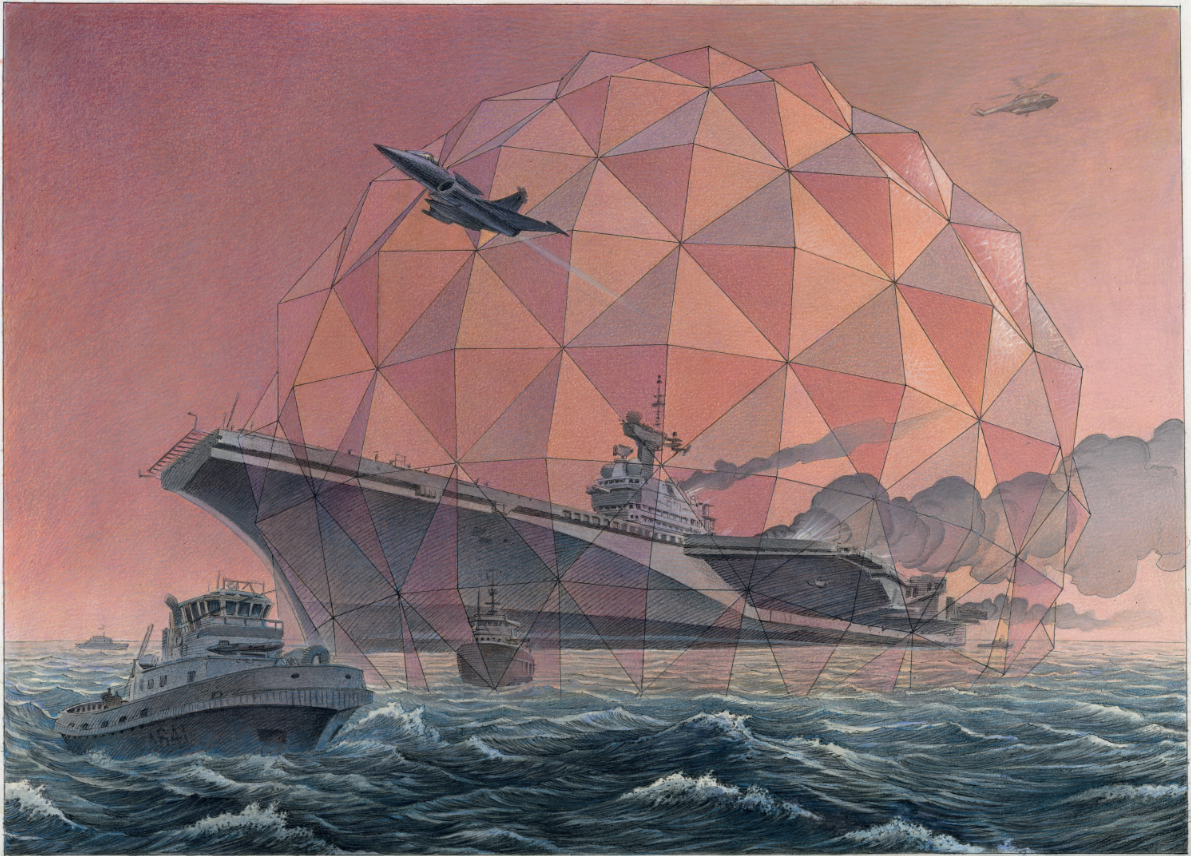 In the Mediterranean basin, political and economic forces are shifting and rebuilding. After a period of instability, a nationalist junta takes power in Troy. Driven by a desire to expand the Trojan government’s sphere of influence, its officers turn their attention to outlying cities. In the face of this threat, the Ionians and Thracians rearm themselves with help from Carthage, which invests heavily in its Salambo campaign aimed at lining Europe’s eastern border with an impenetrable network of hyperfortresses.
These new defensive systems have been created to counter the spread of hypervelocity missiles. Those weapons, which can travel at dizzying speeds, are redefining the rules of combat, and act as a permanent sword of Damocles. To protect themselves, the warring parties develop sophisticated defense mechanisms that combine detective and protective elements. By the end of the 2040s, this network of technology has acquired a name: the hyperfortress.
Over the years, the conflict becomes bogged down. The opposing hyperfortresses face off, but are never able to advance. A single Trojan attack in 2043 manages to hit and damage a Carthaginian vessel. That’s followed by counterattacks, but the Ionian and Thracian forces come to naught against Troy’s network of hyperfortresses. Cyberattacks, sabotage, undercover spies: the combatants try a variety of tactics to pierce enemy lines, until a crude nuclear weapon explodes in the atmosphere and Carthage intervenes in support of its Ionian and Thracian allies.