On October 8, 2019, seven young researchers from PSL received one of the 35 L'Oréal-UNESCO French fellowships under the "For Women in Science" 2019 program. 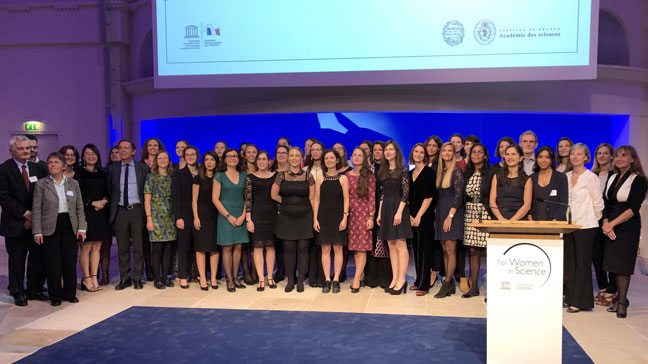 Their research work focuses on neuroscience, cognitive and behavioural sciences, coral ecosystems, cryptography, oncology... and contributes to prepare the rise of the quantum computer, to protect the ecosystems, to new methods for mental health disorders, or to alternative therapeutic strategies... These six young researchers are members of cutting-edge laboratories and departments at Université PSL, such as the Plasticité du cerveau Laboratory at ESPCI Paris, the Computer Science Department at Ecole Normale Supérieure - PSL, the département d'Etudes Cognitives at Ecole Normale Supérieure - PSL, the CRIOBE Laboratory at EPHE - PSL, the Signalisation et progression tumorale Team at Institut Curie, and the Centre interdisciplinaire de recherche en biologie CIRB at Collège de France.

In 2019, women account for only 28% of university enrollment in the basic sciences in France. Alexandra Palt, Managing Director of the L'Oréal Foundation

The L'Oréal-UNESCO Fellowship in the "For Women in Science" fellowship, awarded in partnership with the Academy of Sciences and the French National Commission for UNESCO, promotes a new balance of power in the scientific world and it has supported the work of 265 doctoral and post-doctoral scientists in recent years. The 6 winners, selected from among more than 800 other applications for the excellence of their works, the originality of their scientific project and their desire to transmit their passion to the youngest, will each benefit, in addition to a research grant of 15 000€ for doctoral students and 20 000€ for post-doctoral students, from an additionnal training program to their scientific career in order to have the means to break the glass ceiling.