Françoise Combes, European winner of the L'Oréal-UNESCO For Women in Science International Awards 2021

Françoise Combes, an alumna of ENS-PSL, Professor at the Collège de France, and astrophysicist at Observatoire de Paris-PSL, is the European winner of the L'Oréal-UNESCO For Women in Science International Awards 2021. The prize recognizes her exceptional scientific career, alongside four other leading researchers from different regions around the globe. 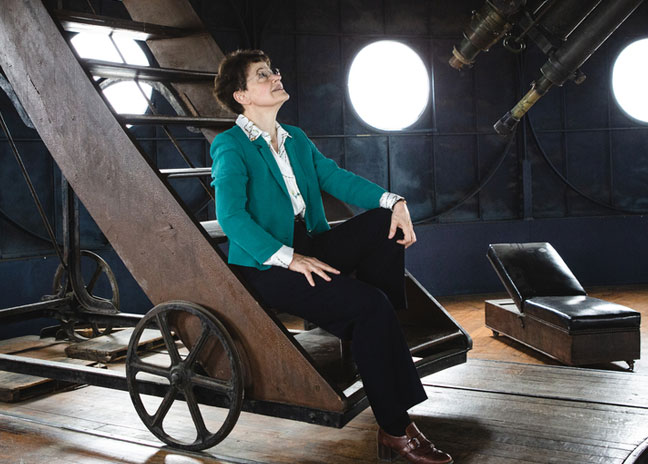 Françoise Combes, a career dedicated to uncovering the mysteries behind the formation of galaxies

The L'Oréal-UNESCO For Women in Science International Award recognizes Françoise Combes for her entire career. From discovering molecules in interstellar space to using supercomputers to simulate the formation of galaxies, her work has paved the way to better understand the birth and evolution of stars and galaxies, as well as the role of supermassive black holes in the centers of galaxies.

Combes, an alumna of ENS-PSL, Professor at the Collège de France, and astrophysicist at Observatoire de Paris-PSL, was previously awarded the CNRS Gold Medal in 2020.
As a researcher, professor, and lecturer, Combes has inspired many a scientific vocation among young scientists, both women and men. She was the sponsor of the PSL doctoral awards ceremony in 2019.

"An immense amount of knowledge is still undiscovered", by Françoise Combes

«“PSL has a long history of illustrious women of science. Marie Curie springs easily to mind, of course, but there have been so many others, including her own daughter Irène, Germaine Tillion, Jacqueline de Romilly, and Simone Weil, to name a few. These pioneers were role models for entire generations of young women. For Françoise Combes to receive the L'Oréal-UNESCO For Women in Science International Awards is a source of pride for our entire community. Her career is a superb example for our young scientists to follow,” says Alain Fuchs, President of Université PSL.

Women and Science at Université PSL

According to a UNESCO study published today, 33% of researchers worldwide are women. This figure is the result of slow progress, and it remains low in certain disciplines such as mathematics, computer science, and engineering.

Université PSL has introduced several initiatives to overcome this. For example, the Women and Science Chair at Dauphine – PSL applies and develops multidisciplinary approaches to analyze the determining factors and impact of the low representation of women in research and scientific careers. 60% of the class in the Sciences track of Université PSL’s CPES - Multidisciplinary Undergraduate Degree is young women.

On this International Day of Women and Girls in Science, the 11 schools of PSL are showcasing their women researchers and engineers of every generation, who together are working to advance science. Find the campaign on the Twitter, Instagram, and LinkedIn accounts of PSL and its schools under the hashtag #EllesFontPSL.

The L’Oréal-UNESCO international awards for women in science

The Fondation L’Oréal et l’UNESCO, upholding the conviction that the world needs science, and science needs women, has worked to improve the representation of women in scientific careers. By making them more visible, the award means to make their talent visible and to inspire new careers.
Since 1998, the For Women in Science program has distinguished each year five great women researchers from all continents.
Since its creation, the Fondation supported and raised the profiles of 117 laureates and more than 3,500 talented young scientists, both doctoral and post-doctoral candidates.