Demanding: a selective program in a unique scientific and cultural environment, backed by some of France’s most prestigious schools.

The CPES Multidisciplinary Undergraduate Degree is a general multidisciplinary program, providing broad exposure to culture, project-based teaching and introducing students to research. It is a 3-year program based on the principle of gradual specialization and teaching in small groups, created in partnership with Lycée Henri-IV.

Hosted by some of the most prestigious higher education institutions, the CPES educates very high-potential students who are both creative and daring. With a single goal: to create the new decision-makers, researchers and entrepreneurs for the economic, academic and cultural spheres.

The CPES is a selective and highly demanding multidisciplinary program, leading to a Bachelor’s degree awarded by the institution. Students can pursue their higher education by moving on to a Master’s degree at Université PSL or any of the other major universities and Grandes Écoles, either in France or abroad. 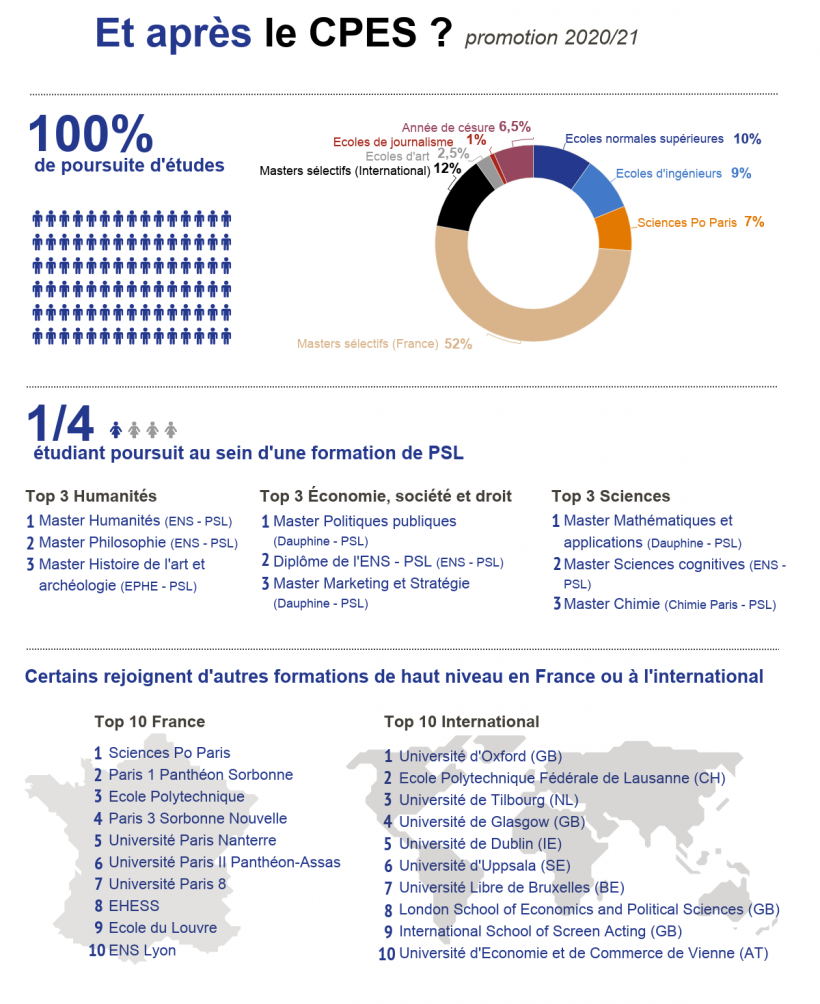 The CPES is a highly demanding program, designed for students from France or abroad who are curious and creative, and who display critical thinking.
Depending on each student’s specific track (chosen specialization), the curriculum leads to different credentials (Physics, Chemistry, History, Art History and Theory, Philosophy etc.)

The CPES degree (for "cycle pluridisciplinaire d’études supérieures”) is a selective bachelor degree with “grade de licence” awarded by the French government. More information: Official decree
For the record, the selection rate for access to this diploma is among the highest in France (4300 high school candidates for a capacity of 150 students in the first year).

Any question? Read the CPES FAQ

All holders of a general Baccalaureate or high school diploma are eligible to apply for the first year. The program includes basic courses in the main Humanities disciplines: literature, philosophy, history, art history and theory, ancient cultures, with English a compulsory part of the core curriculum. An introduction to quantitative methods and surveys completes this humanities program, plus one elective course. Teaching is provided by faculty and teachers of preparatory classes for Grandes Écoles.

In the second year, a system of double majors is offered, with each student choosing 2 of the following 3 majors:

The last week of the second semester is devoted to an introductory internship in journalism at the Institut Pratique du Journalisme at Université Paris-Dauphine - PSL. As part of the practical research they have worked on in the second semester, students prepare a research file in groups, supervised by a researcher, on a subject they have developed as part of a multidisciplinary approach. This file is presented according to academic research criteria, and an oral presentation must be given at the end of the year.

In the third year, 3 specializations are offered – Philosophy, History or Art History and Theory – a continuation of the choice of majors in the second year. Students must also choose 2 courses from another specialization, or from the Certificate of Media and Journalism, created by the Institut Pratique du Journalisme at Dauphine-PSL.

During the year, students work on an individual research thesis in their specialization, supervised by a faculty member. They must give a presentation of their thesis, and this is a requirement for their diploma to be validated. Students can use this first research project to support their application to join certain Master’s degree programs.

On completion of their 3-year program in Humanities, students are awarded a Bachelor’s degree by PSL, opening the way to a wide range of selective Master’s degrees in France or abroad. Some Grandes Écoles are also accessible through parallel admission.

The Science track includes a wide range of scientific disciplines - from mathematics to computer science and including experimental sciences – enabling students to gradually refine their choice of studies.

The Science track is intended for students interested in the exact sciences (mathematics, physics, chemistry, computer science and biology), and who want to study these scientific subjects in more depth before making an informed choice about their studies in the second year.

Teaching takes place at Lycée Henri-IV and, for practicums in Optics, at the Paris Observatory – PSL Meudon site, with courses taught by faculty and teachers of preparatory classes for Grandes Écoles.

The academic year is made up of a core curriculum (basic mathematics, logic, algorithmics, environmental history, research project and one course chosen from those offered by the other tracks) and one major, either "Mathematics" or "Experimental Sciences".

Courses take place mainly at Mines Paris - PSL and at ENS - PSL (Jourdan Campus). The Observatoire de Paris - PSL hosts CPES Science students for practicums in optics. Courses in modern languages and economics are the same as for students in the SESJ track.

At the end of each semester one week is set aside for students to come together:
- in the first semester, they work together in small groups in artistic workshops (around 20 hours) joining up with schools of art and creation associated with PSL, including FEMIS.
- in the second semester, they participate in a robotics workshop.

During the second semester, students also spend 60 hours on their first laboratory research project. The project is supervised by faculty and researchers and an oral presentation must be given before a jury at the end of the year.
Examples of projects: Life sciences: morphogenesis and microscopy - Institut Fresnel (Marseille). Logistic maps and chaos – Department of mathematics, ENS - PSL. Low-voltage electrical machine for an embedded application, ENS Paris-Saclay Laboratoire SATIE. Study and modeling of earthquakes – Department of geology, ENS - PSL. Comparison of data from the Mars mission, Science Laboratory at Mars Climate Database - Dynamic Meteorology Laboratory, Sorbonne University site. Expression of Hr78 in the establishment of cell processes during metamorphosis of the notum in Drosophila - Institut Curie. Electrophoretic characterization and application of quantum dots functionalized with metallophtalocyanines.

In the third year, students continue with their specialization, choosing one from two, but maintain their spirit of openness by selecting a combination of options from different tracks.
Students also complete an individual research project, supervised by a faculty member, they must produce a project report and give a presentation at the end of the year.
The third year is also the time for students to consider the direction they will take "after CPES". The Director of the track and faculty members support students with the various procedures and help them prepare their application packages for a Master’s degree (in France or abroad) or for admission to an Engineering school.

On completion of the Science track, students obtain a Bachelor’s degree awarded by PSL, which opens up choices in a wide range of Master’s degree programs in universities in France or abroad. Some Grandes Ecoles are also accessible through parallel admission.

The Economics, Society and Law track aims to produce students able to analyze and understand economic and social reality in all its complexity. This is achieved through in-depth teaching of the Social Sciences (Economics, Sociology, Political Science) with Law in addition. The importance of Mathematics varies according to the chosen direction. Particular attention is paid to teaching quantitative methods (statistics, econometrics) and qualitative methods (field surveys), as well as the basics of research. The focus is on rigor, openness, and hard work to achieve intellectual autonomy.
The Economics, Society and Law track is open to holders of a Baccalaureate ES (Economics and Social Sciences stream) or S (Sciences stream). As well as joint activities (research conferences, cultural outings), the track offers a wide range of courses: mathematics, economics, sociology, political science, introduction to law, history, languages, philosophy.

In the first year, students are encouraged to learn about all the social sciences: Economics, Social Sciences, Law, with mathematics playing a more or less important role, according to the student’s profile.

Download the outline of the first year of the Economics, Society and Law track

In the second year, students choose two of the following 3 majors:

One week is set aside at the end of each semester to allow students take part in an introductory internship in journalistic writing at the Institut Pratique du Journalisme, Dauphine-PSL.

In the third year, compulsory courses take place at Dauphine - PSL. Depending on the choices made in the second year, different specializations are possible: Economics and society, Sociology and political science, and Law and public governance:

Students in Economics and in Sociology and Political Science produce an individual research project supervised by a faculty member, which must then be the subject of an oral presentation. Law students participate in the Clinique juridique de Dauphine - PSL. Finally, the optional Media and Journalism Certificate offered by the Institut Pratique du Journalisme, Dauphine – PSL introduces students to the journalism professions.

On completion of the 3-year program in the Economics, Society and Law track, students are awarded a Bachelor’s degree by PSL, opening the way to a wide choice of university Master’s degrees in France or abroad.

PSL has a housing service to help students find accommodation. The different housing options are described on their website. Students who have confirmed that they wish to accept a place on the CPES, having indicated “oui définitif” (“definitive yes”) on the Parcoursup online application system, can apply for housing. They will be charged a housing support fee of €49 (this fee will be reimbursed in the case of students receiving a grant).
These fees concern all requests for housing in a residence processed by the PSL Housing Service.
Students receiving CROUS grants and newly-arrived international students have priority.
For all requests for housing assistance, students must send an email to logement.housing@psl.eu giving their first name, last name, date of birth and whether they have been accepted for the CPES.

Students who are receiving a CROUS grant, levels 1 to 7, are guaranteed housing for their 3 years of study. For all these students, PSL awards a complement to the APL (Personalized Housing Assistance). When cumulated with the APL, this additional grant means that grant-holders can benefit from free housing for 3 years (Bachelor’s degree Year 1 to Year L3).
Grant-holders at level 0 bis and international students can be allocated housing, subject to availability. For international students, parents’ resources are taken into account by the PSL housing allocation committee.
Students not receiving grants cannot be allocated a room in a CROUS residence. However, they can contact the PSL Housing Service for help in their search for accommodation.
Accommodation is offered in one of the PSL residences. The location of the accommodation may change from one year to the next.

Many different types of financial assistance are available to help you have a trouble-free start to your university year.

Customized support for international students from admission to PSL to their arrival in Paris.

A free healthcare service is available all year round.

Prerequisites: To apply, you must have already completed or be in the process of completing a general secondary education French baccalauréat diploma (obtained in France or abroad).
Admissions are based on application on the French platform for managing undergraduate applications : Parcourssup.

CPES admits students directly to the second year who have already passed one year of higher education study (Grandes Écoles preparatory classes or university coursework) and who are looking for a change in academic path.
Admissions are based on an application which can be downloaded from the PSL applications portal.

Any question? Read the CPES FAQ

Esther, a second-year student at CPES show you around her campus. Discover the Lycée Henri-IV where the first year classes take place and many other emblematic places on campus! Enjoy your visit!